Not Your Average Jo...

Joanne Zienty:  Librarian, Writer and winner of the Soon to Be Famous Illinois Author Project 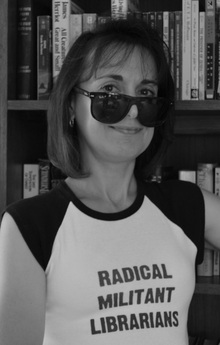 Born and raised on Chicago's South Side, Joanne Zienty vividly remembers  the “glow of  industry” that lit the night sky with an orange haze and can still summon the acrid odor of the fumes of coke ovens and blast furnaces, although the steel  mills have been shuttered for decades.
Joanne spent a lot of time wandering the aisles of her local branch of the Chicago Public Library. Besides wandering, she also did a lot of reading. But when she couldn't find the stories she wanted to read, she started writing her own. Joanne's first success as  a writer came in 5th grade, when she completed a 70 page novel - an homage to Walter Farley's Black Stallion series - and had her first play – a Thanksgiving  melodrama – produced on the stage of her elementary school.

She's been writing ever since.

As an undergrad at the University of  Chicago, Joanne had the pleasure of dropping, along with half of the other students  in the class, a creative writing course taught by Richard Stern, after he threatened on the first day to rip everyone a new one, metaphorically speaking, and woe unto students concerned about their GPAs.  Well, who wasn’t?
Joanne did a stint as a department manager and network administrator for a downtown law firm, where she earned a reputation as a bit of a tech geek, then enjoyed a lovely sojourn as a stay-at-home mom.  During this time, Joanne earned her teaching certificate from Roosevelt University and a Master’s in Library and Information  Science from Dominican University.  Joanne is now an elementary school library director, which allows her to combine three of her favorite things:  reading, encouraging others to read, teaching information literacy, and keeping up with her tech geek skills.
And yes, Joanne still writes, too!  She's honed her craft in writing classes offered by Molly Ramanujan Daniels through the University of Chicago’s Graham School and her Clothesline School of  Fiction.  Several pieces written and performed for these classes formed the early chapters of her first novel, The Things We Save.
Joanne lives in a western suburb of Chicago with her very supportive husband and a very naughty cat named Maggie May.

Here's a look at some of my favorite books, courtesy of GoodReads:

I've always wondered about people, places and things, so here's one of my favorite widgets.
​Enjoy the wonder!